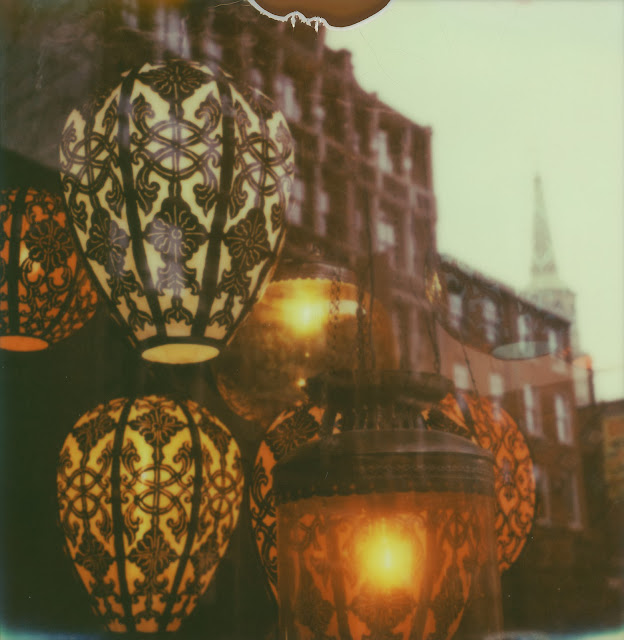 My sweet man and I spent a weekend recently walking the streets of Philadelphia. What I love about that city is that it just doesn't give a damn. You know what I mean? No one will ever glance at your shoes and seat you at a table by the kitchen.

My favorite neighborhood, on a long list of favorites, is the northern bit of Olde City. 19th-century industrial buildings have turned just a tiny bit posh, but not too posh, mind you.

For me, it was a playground on a quiet Sunday morning. We had the streets to ourselves and marveled at the beauty of a truly old city. With my Polaroid in hand, the light and reflections were an utter delight.

Oh, and we had a great cheese steak with provolone when everyone else was just polishing off their first cup of Sunday morning coffee. A perfect weekend. 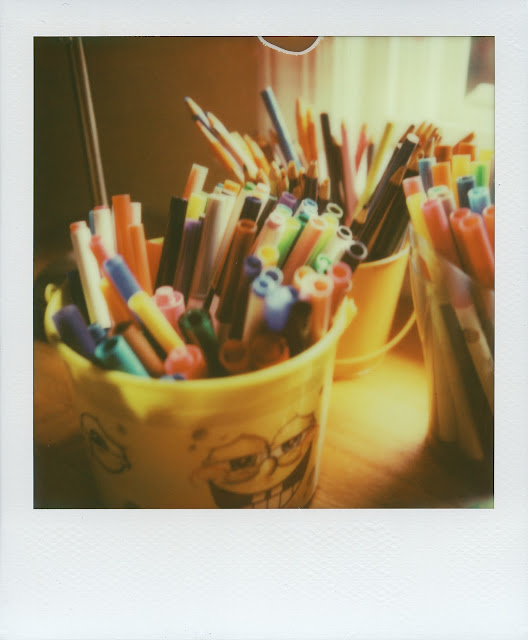 First shot with a new camera (new to me, but an old Polaroid, of course). I held my breath when I took this with a big, beautiful Polaroid SLR 680. Richly rewarded.

My son's desk sits right in front of the best window in the house. He has a view over the back yard and the long needle pine with a perfect bird's nest in it. That and a new Sponge Bob bucket for your 300+ colored markers. What more could a boy want?

My Polaroid camera collection is now complete. At least I said so to my husband today (he knows me better than that). 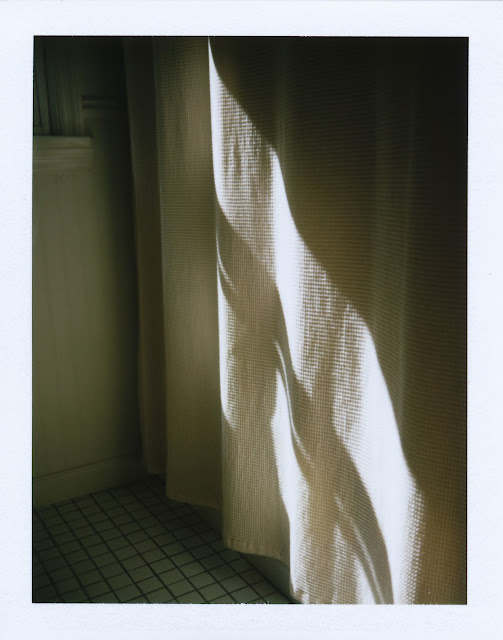 "Study" seems to be the word of the summer. With the guidance and encouragement of a fabulous business coach (can't recommend her more highly, if you are of an entrepreneurial bent), I have been whole-heartedly engaged in growing my business. While this is exercising my creativity muscle, it doesn't involve cameras in the way that you might expect.

And so, I am in the midst of Susannah Conway's Photo Meditations course as well. This week's assignment is to capture the light. When I climb the stairs to my second floor work space (where I am spending a lot of time this summer), I am always struck by this beautiful streak of afternoon light in my bath.

With a new (old) Polaroid Colorpack IV that my dad found this summer at a yard sale, I captured this. It's just a shower curtain, but it makes me very happy every time I see it.
Posted by Pamela Herrick at 2:22 PM No comments:

Email ThisBlogThis!Share to TwitterShare to FacebookShare to Pinterest
Labels: Polaroid 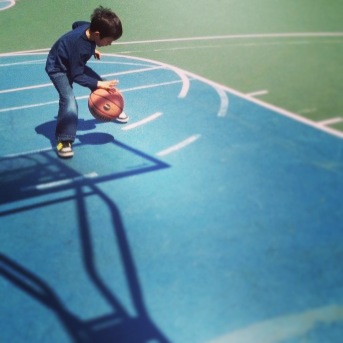 when was the last time you tried something you've never done before
and found out it wasn't so tricky, after all

Posted by Pamela Herrick at 5:10 AM No comments: 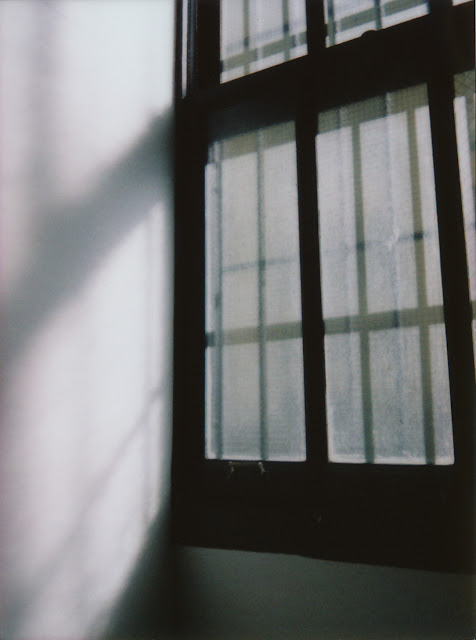 Last week I had a day all to myself in the big city. THE Big City. A whole day to wander. I spent it in Chelsea climbing stairs and hopping on and off elevators in those old warehouses turned to art galleries. The scene interested me as much as the art, some of which was brilliant.

It felt a little like snooping as I found my way along the concrete hallways. The only sound was the tappity-tap of earnest interns at computers. Though their eyeballs were just above the reception counters in each gallery, they didn't even glance up. Tap. Tap. Tap. Poor dears. Dream job in the Big Apple. They mostly looked cold and nervous. But, I digress.

Did I mention that it was quiet? I didn't have to talk to anyone for a whole day. That never happens. Fourteen hours straight. Alone with my own thoughts in unfamiliar places. I got more clarity in one day than I'd have managed in a year of stolen moments.

Though I had two cameras with me, I took only two photographs. That day seeing was so much more important than anything else.

Posted by Pamela Herrick at 5:30 AM No comments: 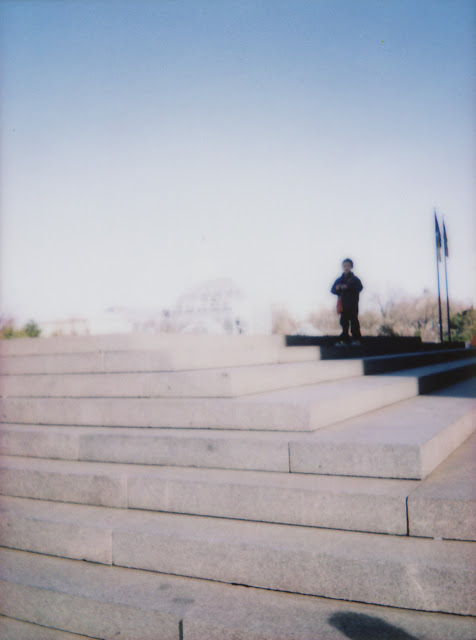 This is not the photograph I meant to take. It is not a great juxtaposition of these granite steps with the crisp, white Capitol dome. No Capitol dome at all, in fact. Too blown out to appear. Just a faint outline of the conservatory of the U.S. Botanical Garden which looked so striking in front of it.

And why couldn't I get my six-year-old out of the frame? (Because I was calling his name and waving, so he planted himself, faced the camera and smiled. duh...) And my sweet friend had no idea her shadow was in the frame when she leaned closer to see what I was looking at. Because this is instant film, by the time the print had developed in my pocket we were a block away. No second chance.

This is not the photograph I meant to take. It is the photograph I actually took. To me, a list of accidents. At first it was another Polaroid disappointment, but as it sat on my desk over the next few days, it began to grow on me. It became a photograph of my boy. A photograph of darks and lights. I love that he is a firmly planted on both of his little feet in the black shadow. I love the twin flag poles behind him for balance. And I particularly love that these darks emanate from a point nearly mid-frame.

It is not perfect, but I love it. And, that is why instant film matters. As it magically develops in your palm, you will have to reconcile what your eye saw with what the camera saw. They will never be the same, and they will teach you to see differently.

Posted by Pamela Herrick at 5:05 PM No comments:

Take Me to the River 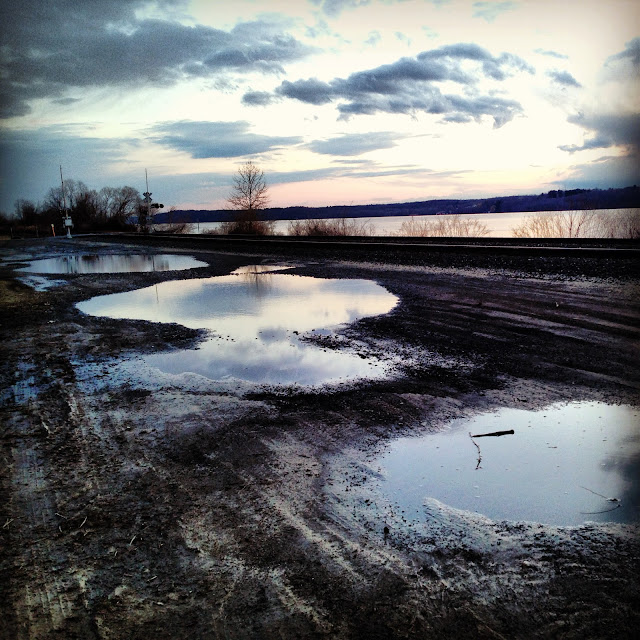 We may have missed seeing the comet just above the horizon at sunset tonight, but it was worth piling the boys into the back seat (tussling the whole way), just to see this. Man, I love this river.


Instagram
iPhone 5
Posted by Pamela Herrick at 12:01 AM No comments: 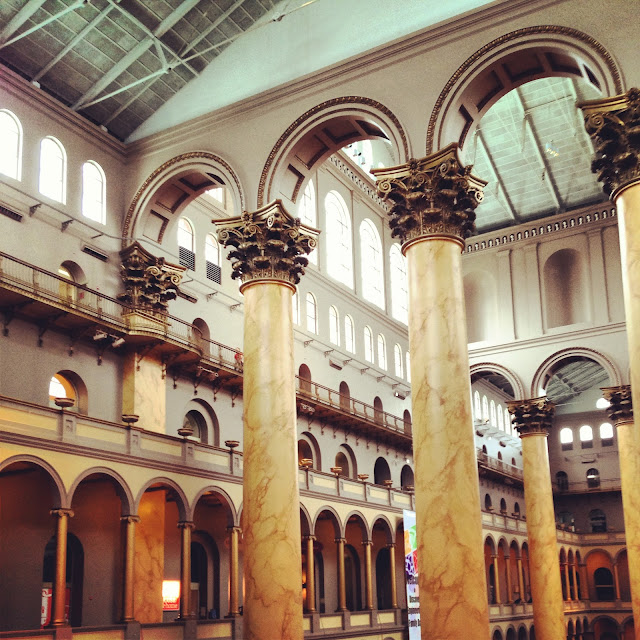 Last month the little man and I made a trip south. Presidents' Day in Washington, DC. How appropriate.

Can you say, "Grand?" The National Building Museum. Seven stories of open, indoor space with about a thousand people gathered in the atrium (most of them no taller than your belly button... oi). The little man and I headed up above the masses to eyeball the architecture. When I am in a city, any city, in consciously, intelligently, beautifully designed architectural spaces, I am happy. In this particular space, over-joyed.

For contrast (and a big bowl of real Thai noodles), we hopped off the train in New York on the way back up the Hudson River. Serendipity is always the best tour guide. She took us here: 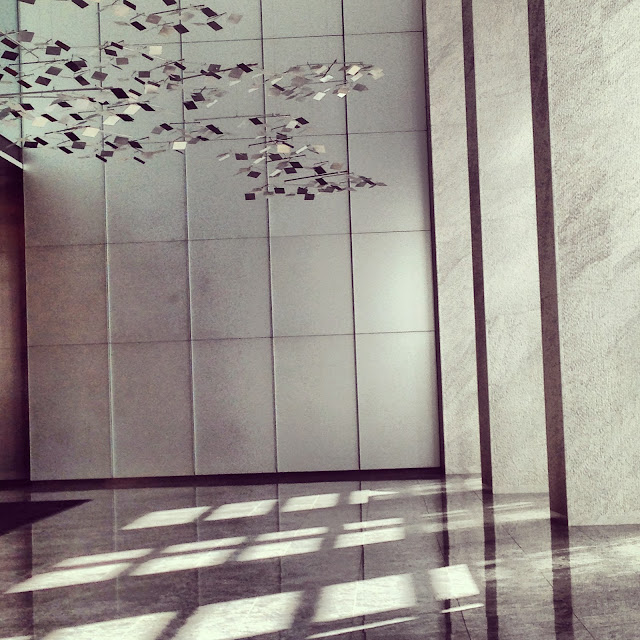 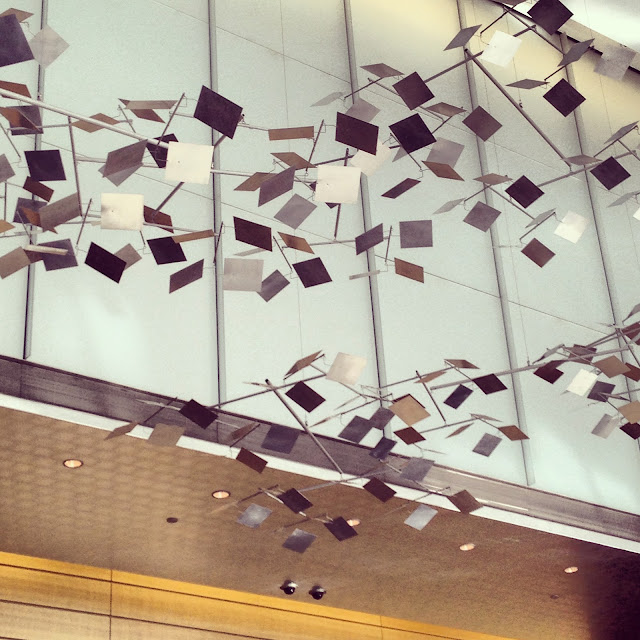 Drink it in, baby, before sliding back onto the train and heading home, where this is the grand space that makes us happy: 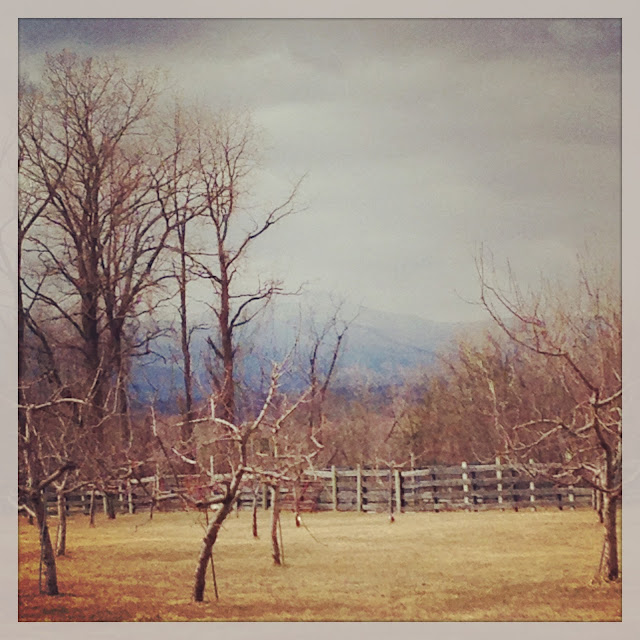 ps: Instagram!
Posted by Pamela Herrick at 7:00 AM No comments: 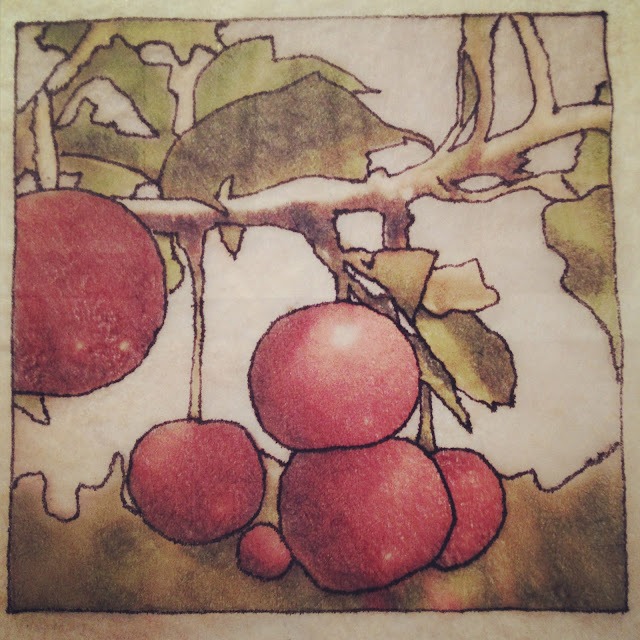 For the past six months (an eternity), I was unable to scan and edit a single Polaroid photograph (dead computer). Excruciating. With my tools gone, I spent late nights flipping through my old digital archives on our son's computer (hoping that it wouldn't bite the dust too as it groaned through acres of data). Since it has been a long, cold winter, I kept my chilly digits wrapped around hot cups of tea.

Tea. Tea bags. Paper. Recycled paper. Perhaps you see where I am headed?

This not-so-interesting digital photograph was made with my old point-and-shoot (where is that thing, anyway? no matter). It is printed on recycled tea bag paper and augmented with pen and ink. My work table is now cluttered with dried tea bags and tea prints.

I love the feel of the handmade image. More experimentation ahead, and a new method for enlivening those crisp digital photographs.
Posted by Pamela Herrick at 6:04 AM No comments:

Lantern in the Window 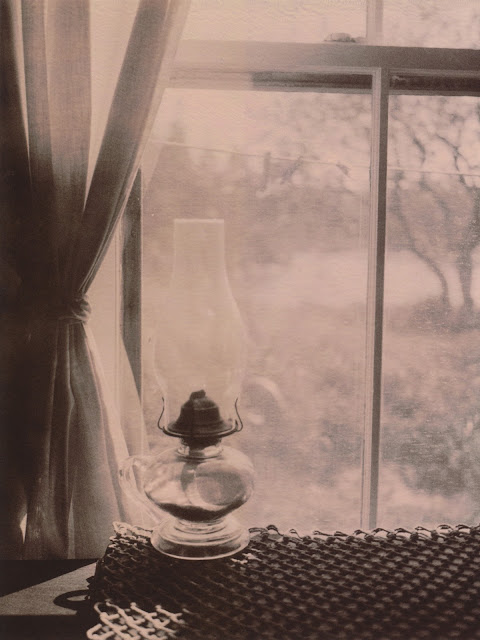 Where have I been? On vacation. Turns out a much longer vacation than planned. Yes, I went to the little island off the coast of Maine in August (where I took this photograph and many others). When I got home prepared to scan pockets full of Polaroids, the little computer just refused to get back to work. Breathed its last.

Then, I got married (yes, married!). That was a little bit of a diversion, as you might imagine. Then Christmas in all its glory. Finally, with all that behind me, I made the long awaited call to the Apple hotline, and a new iMac (brand spankin' new!) arrived. With a monitor so big I can actually SEE my photographs.

It is now up and running, and so am I. My little experiment in living off-line turned into involuntary exile. There were things about it that I liked very much, thank you. But, in the end, I feel best when making photographs and writing about them. (yay!) 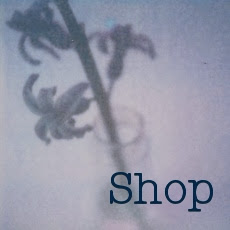 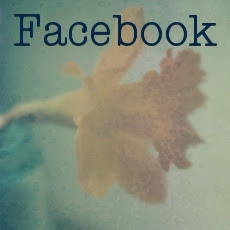 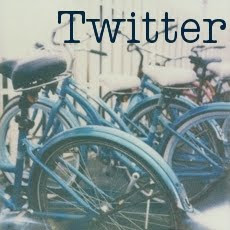 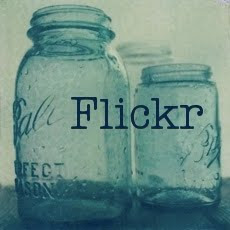 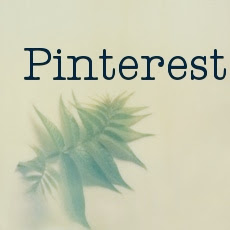 Pamela Herrick
Tivoli, NY
I work with a collection of vintage Polaroid cameras. The mechanics of shooting instant film make capturing an image deeply satisfying. Vintage cameras make noise. They squeak, whir and spit. You'll never get that from you digital. I shoot from my home in New York's Hudson River Valley, except, of course, when my urge to wander takes me exploring. My work has been featured in Kaltblut Magazine.